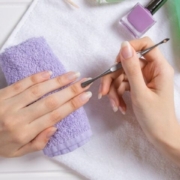 No amount of nail artistry can disguise unhealthy nail beds. Sooner or later (more likely sooner), as your nails grow, problems like peeling, chipping, and breaking will show up. Learn the dos and don’ts for healthy nail beds and stop trying to hide behind a manicure that’s struggling to look good atop inflamed, infected, or dried-out nail beds.

Dos and Don’ts of Hydration for Your Nails

Do drink plenty of water. Don’t soak your nails in it. Keeping your body hydrated is a good way to help maintain healthy nail beds, but constantly exposing your nails to water can make your nails weak or brittle. Use gloves when washing dishes, and keep your hands clear of the water when bathing. Of course, you must use your hands to scrub, but rest them on the edge of the tub when you’re not.

Dos and Don’ts of Cuticles

Dos and Don’ts of Polish

Do use an organic gel nail polish or another product that soaks off quickly to avoid prolonged exposure to acetone. Don’t pick at or peel your polish!

Trying to peel off nail polish, especially gels or acrylics, can do serious harm to your nails. The bonding agents that affix acrylics and the base coats that stick to gels are strong. Peeling your nails risks ripping off chunks of your nail plate, exposing the nail bed to infection—not to mention that it can take months, even years, to heal such damage.